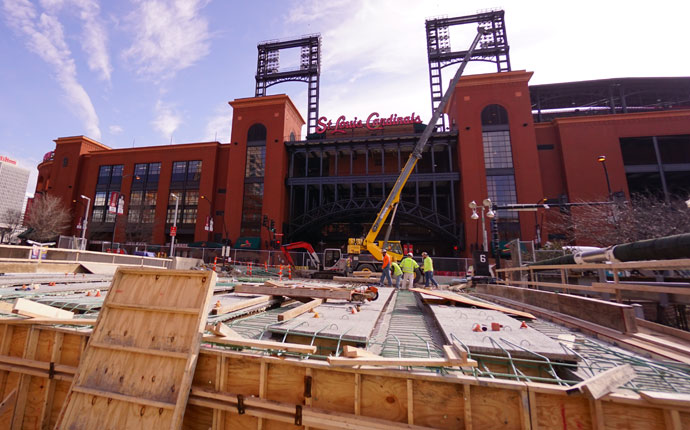 Whether you’re eating a pulled pork sandwich from Triple Play or a jumbo dog from Dizzy’s Diner, St. Louis Cardinals fans agree that the best seats in the house at Busch Stadium are located between first and third base. From these highly sought-after seats you not only get the best look at all the action, but a stunning view of the St. Louis cityscape and The Gateway Arch.

While most experienced fans take the Metrolink to the stadium, many others park across the street and walk the Spruce Street Bridge which is blocked off from traffic on gamedays and spans the gap over the Metro tracks as a dedicated walking bridge.

What baseball enthusiasts have in common regardless of favorite food, players, or mode of transportation is the hope that their team would make the playoffs. Unfortunately, on October 13th, the 2015 baseball season came to an abrupt end for the St. Louis Cardinals.

While fans and players alike came to grips with the loss, the team at Kozeny-Wagner rolled into action.

Awarded the challenging task of reconstructing the Spruce Street Bridge, we were required to complete the project by April 11, 2016 to accommodate opening day walking traffic while making sure the Metrolink below continued to run on schedule. Aside from the unknown ending of the Cardinal’s baseball season, several other circumstances added to the complexity of this project.

The Schedule And The Weather

The biggest challenges we had with the tight schedule constraints were due to severe weather, plan changes and knowing exactly when we would be able to begin. Every phase of the project needed to move like clockwork as items obviously needed to be constructed in a certain order. When one item in the critical path was delayed due to weather or plan changes, it would affect everything down the line. As the project backed up because of multiple delays, we worked double shifts to make up for the days we lost throughout the project. Additionally, certain items had to be completed at specific times due to the schedule and/or requirements of the Metrolink. That meant juggling construction tasks with the train, which continued to run on schedule. By powering down the track after the train passed and setting up a flagger, we were able to avoid interrupting the daily commute.

Grace for the Peregrine Falcon

The Cardinals weren’t our only concern. Once on the brink of extinction, due to dedicated conservation efforts, the Peregrine Falcon has been given a second chance. There are now eight known wild nests in the greater St. Louis area. A clause in our contract stated that we were not to perform any work from April 15 through July 15; nesting season for the Peregrine Falcon.

Our team came up with a creative plan that allowed us to complete the bridge, while leaving some of the demolition for late July, thereby not interfering with the falcons, the Cardinals, or the fans.

Special Consideration for the Westin

While our time constraints required we work at nights, patrons of the nearby Westin Hotel expected to sleep and the noise typical of a construction site can make that difficult to accomplish. We worked with the hotel to alter our start and stop times with special attention given to the time from 10 pm to 6 am. In so doing, we were able to accomplish the maximum amount of work while having minimal effect on guests of the Westin.

Constructing a $5 million project in an area that amounted to about 150’ by 150’ made for its own challenges. The confined space combined with the manpower and equipment needed to drill the secant walls made it difficult to have more than one job occurring simultaneously. Once the Schnabel Foundation Company was off site, we were able to work on both sides of the bridge, but the tight space still required we move our equipment from one side to the other. During the last six weeks of the project we shared the space again with the Trigen crew and their equipment as they completed work on the new steam vaults.